Endoscopic sinus surgery is a known approach for sinonasal pathologies. Due to close proximity of sinuses to orbits and brain, surgeon should be aware of sinonasal anatomy and associated variations. The roof of ethmoid (fovea ethmoidalis) separates the ethmoidal cells from the anterior cranial fossa. Medially the fovea attaches to the lateral lamella of the cribriform plate, which is the thinnest bone of the skull base. Hence, it is at a high risk of getting damaged during surgery.

To ascertain the quantitative analysis of height of lateral lamella according to Keros classification in the computed tomographic (CT) images of patients presenting to our clinic.

It was retrospective review of 77 CT scans using computerized software known as picture archiving and communication system. The height of lateral lamella was examined for both sides and then classified according to Keros classification. Asymmetry between two sides was also reported.

Understanding of the anatomy of ethmoid roof with its possible variation is crucial to give the surgeon optimal information about the possible risk that one can face during the surgery. Hence dreadful complications can be avoided. 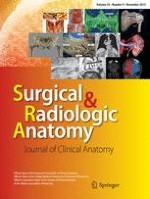