Hyperuricemia has been associated with higher mortality in the general population, but less is known about CKD patients. The aim of our study was to determine the impact of elevated serum uric acid on cardiovascular mortality of CKD patients who later progress to hemodialysis.

In this retrospective study, 120 CKD patients (entire population of patients with ESKD on January 1st, 2012) were observed from their first visit at the Nephrology outpatient clinic, while transitioning to hemodialysis, and until their death or January 1, 2016. After non-cardiovascular death exclusion, 83 CKD patients (33 female, 50 male) were left for further analysis. The average time of observation was 8.8 ± 4.2 years. Serum uric acid was measured regularly (every 3 months). No patients were treated for hyperuricemia. Mean uric acid of 420 µmol/L was set as a cut-off between normouricemic and hyperuricemic patients as per the laboratory’s reference values. Survival rates were analyzed using Kaplan–Meier survival curves. Three Cox regression models were used to assess the influence of uric acid on survival.

Mean uric acid was 379.8 ± 71.6 µmol/L (range 220–574). Sixty-three (75.9%) patients were normouricemic and 20 (24.1%) were hyperuricemic. Cholesterol was the only variable to show statistically significant difference (p = 0.004) between the groups. Bivariate analysis revealed an association between death and age, hyperuricemia, arterial hypertension, and history of cardiovascular disease. Kaplan–Meier survival analysis showed higher risk of cardiovascular death for hyperuricemic patients (log rank test; p < 0.0005). In Cox regression models, hyperuricemia remained a predictor of cardiovascular mortality (SE = 0.500, Exp(B) = 14.120, 95% CI 5.297–37.640) in our patients next to age and arterial hypertension.

The results indicate an association between hyperuricemia and cardiovascular mortality in CKD patients who transition to hemodialysis. 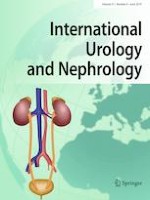 Nephrology - Letter to the editor