Patients with human immunodeficiency virus (HIV) infection have an increased risk of cardiovascular disease (CVD). While viral suppression with antiretroviral therapy decreases CVD risk overall, several studies have suggested that certain antiretrovirals, particularly certain protease inhibitors, may be associated with an increased relative risk of CVD. In AIDS Clinical Trials Group 5260 s, ritonavir-boosted atazanavir (ATV) was associated with slower atherosclerosis progression compared to ritonavir-boosted darunavir and raltegravir, potentially due to hyperbilirubinemia. Although hyperbilirubinemia may lead to increased rates of treatment discontinuation, it may also contribute to a favorable cardiovascular (CV) profile for ATV. To fully elucidate the effect of ATV on CVD risk among HIV-infected patients, a systematic review of the literature was performed.

A systematic search of the PubMed and Embase databases was conducted on August 26, 2015, using terms to identify papers that discuss ATV, HIV, and CVD. Articles were limited to English-language publications of randomized-controlled or observational studies investigating adult humans. The primary outcome was the incidence of CVD. Articles describing surrogate markers of CVD were also included.

Ten studies were included in this qualitative analysis: six reported CVD outcomes, two reported data on atherosclerosis as assessed by carotid intima-media thickness (cIMT), and two reported outcomes related to endothelial function. The studies reporting the incidence of myocardial infarction (MI) among HIV-infected patients showed that ATV (boosted and unboosted) was not associated with an increased risk of acute MI. Other CV endpoints were similarly unaffected by treatment with ATV. Compared with non-ATV-based regimens, ATV had beneficial effects on cIMT progression in the publications identified, with no apparent impact on endothelial function.

This analysis showed that there was no increased risk or occurrence of adverse CV events among HIV-infected patients receiving ATV. Markers of atherosclerosis were improved, suggesting a possible antioxidant effect of ATV, and endothelial function was not affected. 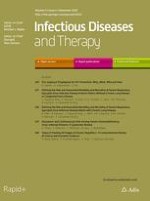 Value of Treating All Stages of Chronic Hepatitis C: A Comprehensive Review of Clinical and Economic Evidence

Pre-exposure Prophylaxis for HIV Prevention: Why, What, Who and How

Cross-Sectional Survey of Perceived Barriers Among Community Pharmacists Who Do Not Immunize, in Wayne County, Michigan