Sepsis is one of the leading causes of death among hospitalized patients. At the onset of this condition, there is an over-production of pro-inflammatory mediators that contribute to organ failure and death. The excess production of pro-inflammatory mediators also impairs insulin signaling, which may be a pathophysiological tissue marker of proinflammatory cytokine action before organ failure. Statins and diacerein have pleiotropic effects, such as the blockage of inflammatory signaling pathways, suggesting that these drugs may be an attractive therapeutic or prophylactic strategy against sepsis. The aim of the present study was to investigate whether a statin or diacerein can improve insulin signaling, disease tolerance and survival in sepsis by inhibiting inflammatory pathways.

We investigated the effect of these drugs on survival, tissue insulin signaling and inflammatory pathways in the liver and muscle of rats with sepsis induced by cecal ligation and puncture (CLP).

The results showed that administration of medications, with anti-inflammatory ability, to septic animals increased survival and improved disease tolerance and insulin resistance in the liver and muscle. The treatment also attenuated ER stress, NF-κB, JNK activation and restored glucose-6-phosphatase (G6Pase) levels in the liver. 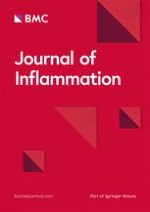 Correction to: Knockdown of miR-155 protects microglia against LPS-induced inflammatory injury via targeting RACK1: a novel research for intracranial infection

The role of adipokines in skeletal muscle inflammation and insulin sensitivity

In vitro suppression of inflammatory cytokine response by methionine sulfoximine