Migraine is a headache disorder characterized by sensitivity to light and sound. Recent research has revealed abnormal visual-spatial attention in migraineurs in between headache attacks. Here, we ask whether these attentional abnormalities can be attributed to specific regions of the known attentional network to help characterize the abnormalities in migraine. Specifically, the ventral frontoparietal network of attention is involved with assessing the behavioural relevance of unattended stimuli. Given the decreased suppression of unattended stimuli reported in migraineurs, we hypothesized that migraineurs would have abnormal processing in the ventral portion of the frontoparietal network of attention. To address this, we used functional magnetic resonance imaging to assess the attentional control networks during visual spatial-orienting tasks in migraineurs (N = 16) as compared to non-migraine controls (N = 16). We employed two visual orienting paradigms with target discrimination tasks: (1) voluntary orienting to central arrow cues, and (2) reflexive orienting to peripheral flash cues. While both groups showed activation in the key areas of attentional processing networks, migraineurs showed less activation than non-migraine controls in a key area of the ventral frontoparietal network of attention, the right temporal parietal junction (rTPJ), during both voluntary and reflexive visual spatial orienting. Given the role of rTPJ is to assess the visual environment for behaviorally relevant sensory stimuli outside the focus of attention and signal other attentional areas to reorient attention to behaviorally salient stimuli, our findings fit with previous research showing that migraineurs lack suppression of unattended events and have heightened orienting to sudden onset stimuli in peripheral locations. 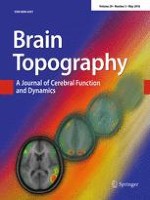 Detectability of Fast Ripples (>250 Hz) on the Scalp EEG: A Proof-of-Principle Study with Subdermal Electrodes