Attractiveness of Eyebrow Position and Shape in Females Depends on the Age of the Beholder | springermedizin.de Skip to main content
TOOLBAR 1 2 3 4
SUCHE MENÜ 1 2 3 4

Great diversity exists among individuals with respect to eyebrow position and shape, and the notion of an “ideal” eyebrow has changed quite significantly over the past several decades.

This study compared three different variations of eyebrows. One variation was the arched eyebrow with the maximum height in the middle. The other two variations had their maximum height in the lateral third, but differed in their position (high vs low). For each of the seven female portraits presented, three variations were generated using morphing software. A total of 357 subjects 12 to 85 years of age compared these variations and ranked each woman individually with respect to perceived attractiveness.

The data show that the preference for a specific eyebrow shape depends on a person’s age. Young subjects up to 30 years of age preferred eyebrows in a lower position, and ruled out arched eyebrows. Subjects older than 50 years stated exactly the opposite preference.

First, there is not one single beauty ideal for eyebrows, but at least three. The ideal a person prefers depends on his or her age. Second, because trends are generally introduced by young people and not by older individuals, and the young tend to prefer eyebrows in a lower position, it seems plausible to assume that the trend currently appears to be moving away from arched eyebrows toward lower positioned eyebrows with a maximum height in the lateral third. 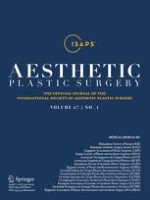 Reconstituted Botulinum Type A Neurotoxin: Clinical Efficacy After Long-Term Freezing Before Use

Magnesium Sulphate as an Adjuvant to Total Intravenous Anesthesia in Septorhinoplasty: A Randomized Controlled Study

Clinical Evaluation of a New Self-Drying Silicone Gel in the Treatment of Scars: A Preliminary Report