Several factors, such as aging, pregnancy, and weight loss, reduce the elasticity of the breast tissue, and ptosis occurs. Due to aging and gravity, it is not possible to completely prevent breast ptosis. The goal is to delay the recurrence of ptosis as much as possible.

Because of the autoprosthesis flap, breast projection was more prominent, even in the lying position. All the patients were very satisfied with their size, shape, projection, and natural appearance. In particular, the image in the lying position was very similar to a mastopexy performed with an actual breast implant; thus, sagging was not observed.

In augmentation mastopexy patients who do not want implants, upper pole filling and adequate breast projection can be easily achieved with this method. The potential risks of capsule formation, implant rejection, and implant rupture were not observed with this technique. 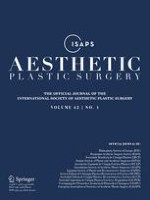 Desmoid Tumor and Silicone Breast Implant Surgery: Is There Really a Connection? A Literature Review

Aesthetic Training for Plastic Surgeons: Are Residents Getting Enough?