Influenza virus infection causes significant morbidity and mortality worldwide. Humans fail to make a universally protective memory response to influenza A because of high mutation rates in the immune-dominant influenza epitopes. We seek the development of a universal influenza A vaccine. The extracellular domain of the M2-ion channel (M2e) is an ideal antigenic target, as it is highly conserved, has a low mutation rate, and is essential for viral entry and replication. Considering the potential of a universal influenza vaccine for lifelong protection, we aimed to examine this potential using a recently published gold nanoparticle M2e vaccine with CpG as an adjuvant (AuNP-M2e + sCpG). Intranasal vaccination induces an M2e-specific memory response, which is protective against lethal infection with H1N1, H3N2, and H5N1 serotypes, in young BALB/c mice. Protection with AuNP-M2e + sCpG has been published up to 8 months after vaccination. However, the highest risk population during most influenza seasons is adults over 65 years old. Additionally, the efficacy of many vaccines decrease after aging and requiring booster vaccinations to remain effective.

To determine if the AuNP-M2e + sCpG vaccine is a viable option as a universal vaccination capable of protection through geriatric age, we tested if the AuNP-M2e + sCpG vaccination loses efficacy after aging mice to geriatric age (over 18 months). Our data shows that mice aged 15 months after vaccination (~ 18–21 months old) retain significant M2e-specific antibody titers in total IgG, IgG1, IgG2a, and IgG2b. These mice are significantly protected from lethal influenza challenge (H1N1, 8.3 PFU). Further, these antibody titers increase upon infection with influenza A and remain elevated for 3 months, suggesting the elderly mice retain effective M2e-specific memory B cells. 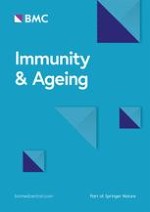