Decompressive craniectomy (DC) is a last treatment option of refractory intracranial hypertension in traumatic brain injury (TBI) patients. Replacement of the autologous bone flap is the preferred method to cover the cranial defect after brain swelling has subsided. Long term outcomes and complications after replacement of the autologous bone flap in pediatric patients were studied in comparison to young, healthy adults.

Medical records of 27 pediatric patients who underwent DC and subsequent replacement of the bone flap between 1998 and 2011 were reviewed retrospectively. Patients were divided into two age groups (group 1: 18 children < 15 years; group 2:9 adolescents 15–18 years). For comparative reasons, a young adult control group of 39 patients between 18 and 30 years was additionally evaluated.

With 81.8 % resorption of the bone flap, this was the major complication in young children. In up to 54.4 % of patients, a surgical revision of the osteolytic bone flap became necessary. However, in some pediatric patients, the osteolysis resolved spontaneously and further operations were not required. Probable enabling factors for bone flap resorption were young age (0–7 years), size of craniectomy, permanent shunt placement, and extent of dural opening/duraplasty. Other complications were bone flap infections, loosening of the re-inserted bone flap, and postoperative hematomas.

There is an unacceptably high complication rate after reimplantation of the autologous bone following DC in pediatric TBI patients, especially in young children up to seven years of age. Artificial or synthetic cranioplasties may be considered as alternatives to initial bone flap reimplantation in the growing child. Despite the fact that DC is an effective treatment in TBI with persistent intracranial hypertension, it is important to realize that DC is not only combined with replacement of the autologous bone flap but also with a high rate of additional complications especially in pediatric patients. 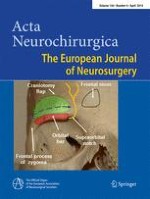 Letter to the editor - Pediatrics

Erratum to: Dynamic transpedicular stabilisation and decompression in single-level degenerative anterolisthesis and stenosis

Orbital cortical approach to lesions around the frontal horn of the lateral ventricle: indication and surgical parameters