Imperfect patient–ventilator interaction is common during assisted ventilation, and the detection of clinically relevant mismatching requires visual monitoring of the ventilator screen. We have assessed the feasibility, sensitivity and specificity of an algorithm embedded in a ventilator system that is able to automatically detect the occurrence of ineffective triggering and double triggering in real time.

The detection of ineffective triggering and double triggering from the algorithm was compared by two operators with the “real” occurrence of the phenomena as assessed using the transdiaphragmatic pressure (Pdi).

Seven of the 20 patients exhibited gross mismatching, while in the remaining patients patient–ventilator mismatching was artificially induced using a pressure control, with a low respiratory rate. Ineffective triggering and double triggering were identified by the operators in 507 and 19 of the 3343 analyzed breaths, respectively. False positives were significantly more frequent in the NIV group than with conventional ventilation. The algorithm had an overall sensitivity of 91% and specificity of 97%. Specificity was statistically higher in the conventional ventilated group than with NIV (99% vs. 95%, p < 0.05).

We have demonstrated the feasibility and efficacy of a new algorithm to detect the occurrence of impaired patient–ventilator interaction during mechanical ventilation in real time. This software may help the clinician in the identification of this problem, which has been shown to have important clinical consequences. 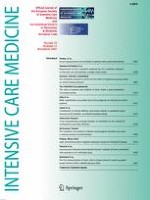 The polycompartment syndrome: towards an understanding of the interactions between different compartments!