Background: Failed obliteration of processus vaginalis (PV) has recently been proposed to be due to persistence of the smooth muscle (SM), which is transiently present to generate the physical force to descend the testis. Sacs from hernia, hydrocele, or undescended testis reveal alterations in Ca2+ contents. Since Ca2+ signaling and some regulatory proteins are involved in programmed cell death (PCD), a flow cytometric evaluation was planned to evaluate the expression of inducers or inhibitors of PCD in sacs from different diagnostic sources. Methods: Sacs associated with male hernia (n=16), female hernia (n=11), undescended testis (n=9), and hydrocele (n=11) were evaluated for binding of annexin and expressions of Bcl-2, Bax, Fas, Fas-ligand (Fas-L), and Fas+Fas-L. The binding and expressions in cells that express α-smooth muscle actin (α-SMA) were also determined. Expressions according to the groups were compared through unpaired t-test, and P values less than 0.05 were considered to be significant. Results: Sacs associated with undescended testis that contain the least SM revealed the most annexin binding, and sacs associated with hernia that contain the most SM binded the least annexin. However, expressions of Bcl-2, Bax, Fas, Fas-L and Fas+Fas-L have not revealed a significant difference. On the other hand, Bax and Fas expressions of cells that express α-SMA have been significantly higher in sacs associated with undescended testis. Conclusions: Since increase of Bax and Fas in cells that express α-SMA are encountered in sacs with the least SM content, Bax and Fas appear to play roles in the amount of persisting SM. The necessities of initial depletion of Ca2+ stores through inositol 1,4,5-trisphosphate receptors and subsequent increase of Bax and Fas levels in the mitochondrial pathway of PCD, together with the role of the sympathetic system in maintenance of SM, suggest a determinative role of the autonomic nervous system for obliteration of PV. 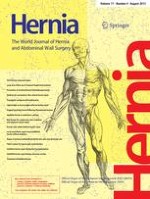 Mesh erosion into the bladder: A late complication of incisional hernia repair. A case report and review of the literature

Review of the management of recurrent inguinal hernia

No fixation of onlay patches in thin patients