Axillary staging in the context of breast cancer is a contentious topic due to the varied practices across UK, Europe, and America. The ACOSOG Z0011 trial has questioned the role of axillary ultrasound in women with breast cancer. Published data has shown that women with ultrasound-positive lymph nodes have a worse prognosis than those with ultrasound-negative lymph nodes. Axillary ultrasound is limited as the sentinel lymph node (SLN) cannot be identified using B-mode ultrasound; however, with the advent of contrast-enhanced ultrasound (CEUS), this has now changed.

CEUS has the potential to revolutionize the way we manage the axilla in the future and may even replace surgical staging. 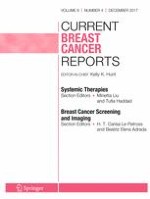 DBT as a Screening Tool and a Diagnostic Tool

The Double-Edged Sword: Controversies in Anthracycline-Based Chemotherapy for Breast Cancer

How Effective Is Mammography as a Screening Tool?