The online version of this article (https://​doi.​org/​10.​1007/​s10815-019-01661-0) contains supplementary material, which is available to authorized users.
Andrabi Syed Waseem and Vertika Singh contributed equally to this work.

To identify the frequency of Y chromosome microdeletions in Indian populations and to quantitatively estimate the significance of association between these deletions and male infertility.

AZF deletions were seen in 10.02% of azoospermic and oligozoospermic cases with the highest frequency of AZFc deletions. Pooled analysis for all studies showed deletion frequency from 0.59 to 32.62% (average = 13.48%). Meta-analysis showed significant association of AZFa, AZFb, and AZFb+c deletions with male infertility. Analysis of Y chromosome microdeletions should be reckoned as an essential testing for diagnostic and therapeutic purposes. 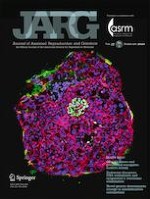 Correction to: Development of an efficient perfusion-based protocol for whole-organ decellularization of the ovine uterus as a human-sized model and in vivo application of the bioscaffolds

Thoughts on the ethics of gestational surrogacy: perspectives from religions, Western liberalism, and comparisons with adoption

PFA is superior to glyoxal in preserving oocyte, embryo, and stem cell proteins evidenced by super-resolution microscopical surveys of epitopes