Social media usage by back pain patients is a new and developing area. Analysing patterns of this online activity offers a new way to understand our patients’ concerns and behaviour around disease. Large volume data can be evaluated on a scale not feasible through alternative methods. A cross sectional review of specific terms relating to ‘back pain’ (BP) and ‘ankylosing spondylitis’ (AS) were tracked internationally on popular websites, blogs and boards over two 3 month periods, in 2016 and 2019. Relevant co-terms were also tracked in these discussions, such as ‘exercise’, ‘medication’ and ‘doctor’. The size of the current online BP conversation is significant; there were over 100,000 mentions/month across each study period, particularly ‘low-’ BP. Discussions about AS increased threefold between 2016 and 2019. More discussions took place online at the start of the week, and in the afternoons. Pregnancy, baby and mens’ health resources were the most popular sites for BP chats. People posting about AS were mainly female (80%) and predominantly had an established diagnosis, with health forums hosting more of these discussions than for BP. Exercise was more commonly mentioned in the context of BP, whereas medications were more common in the AS conversations. Analysing online discussions about BP and AS helps to identify themes amongst patients. Some are seeking a diagnosis, support, or treatment information. Understanding the massive scale of online conversations could help clinicians adopt targeted approaches to increase patient identification, meet patient concerns better, and optimise engagement. 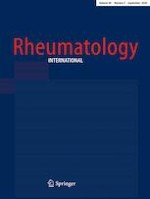 Anxiety and depression in reproductive age women with rheumatic diseases