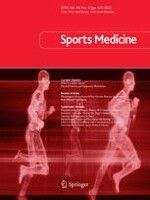 A Systematic Review on the Treatment of Acute Ankle Sprain

Does Physical Activity Impact on Presenteeism and Other Indicators of Workplace Well-Being?