The objective of tooth wear indices is to classify and record the severity of tooth wear or dental erosion in prevalence and incidence studies. There are a myriad of indices [ 1] which vary in type of assessment, scale, choice of teeth and other styles, resulting in non-comparability [ 4]. The main aim of these indices has been in research and health service planning, but since so many indices have been published it has not been possible to compare the outcomes of different studies and so provide an international overview of the present status of this condition. The variation in these indices, and for some their complexity, means that they remain a research tool of limited relevance. Further, there are no convenient and simple methods for general dental practitioners (GDPs) to record the level of tooth wear and erosion apart from using subjective terms such as mild, moderate and severe. The very nature of these terms means that their interpretation varies considerably between clinicians.
These are valid reasons for the need to establish a simple, repeatable and convenient index that is a valid research tool for the dental academic community but also of use in day-to-day dental practice for screening. Ideally, an index would have a basic structure that would allow for more sophisticated categories to be developed for specific research purposes, which could then be broken down again to the simplified version for clinical needs or for screening procedures. An example is the FDI DDE index [ 8] for enamel defects that has a basic screening index and an expanded epidemiological index.
Anzeige
The Basic Periodontal Examination (BPE) [ 5] or the Periodontal Screening Index adopted from the Community Periodontal Index [ 14] was developed to allow a convenient, repeatable method of recording periodontal diseases. Uniquely, these indices have been accepted not only by academics but also as part of the routine clinical examinations by GDPs. Development of these indices allows dentists not only to screen for periodontal diseases in a simple and effective manner but also to improve awareness and understanding of the disease. The same objectives are now needed for erosive tooth wear. Unlike caries and periodontitis, however, there is uncertainty about the validity of the criteria [ 9, 12] to define and grade tooth wear, erosion, abrasion and attrition, and at present, there is no conclusive knowledge how much erosive wear is physiological or can be accepted in relation to age [ 2, 19].
The Basic Erosive Wear Examination (BEWE) has therefore been designed to provide a simple scoring system that can be used with the diagnostic criteria of all existing indices aiming to transfer their results into one unit which is the BEWE score sum. The aim of the BEWE is to be a simple, reproducible and transferable scoring system for recording clinical findings and for assisting in the decision-making process for the management of erosive tooth wear.

The BEWE is a partial scoring system recording the most severely affected surface in a sextant and the cumulative score guides the management of the condition for the practitioner. The four level score (Table  1) grades the appearance or severity of wear on the teeth from no surface loss (0), initial loss of enamel surface texture (1), distinct defect, hard tissue loss (dentine) less than 50% of the surface area (2) or hard tissue loss more than 50% of the surface area (3). The differentiation between lesions restricted to enamel and dentine can be difficult particularly in the cervical area [ 11, 12]. Buccal/facial, occlusal, and lingual/palatal surfaces are examined with the highest score recorded.
Table 1
Criteria for grading erosive wear
*in scores 2 and 3 dentine often is involved
The examination is repeated for all teeth in a sextant but only the surface with the highest score is recorded for each sextant. Once all the sextants have been assessed, the sum of the scores is calculated as indicated on the grid that follows:
Anzeige
BEWE scores
The result of the BEWE is not only a measure of the severity of the condition for scientific purposes but, when transferred into risk levels, also a possible guide towards management (Table  2).
Table 2
Risk levels as a guide to clinical management
aThe cut-off values are based on experience and studies of one of the authors (A. L.) and have to be reconsidered.
The management would include identification and elimination of the main aetiological factor(s), prevention and monitoring, as well as symptomatic and operative intervention where appropriate. It does not provide guidance for the most appropriate prosthodontic or operative technique as there is too much variation at this level of decision making between clinicians. However, for the highest risk levels special care is suggested.
The repetition of the BEWE will vary according to the severity and the relative importance of aetiological and risk factors. For patients particularly exposed to intrinsic or extrinsic acids [ 17], the procedure should be repeated at 6-month intervals, but for most other cases, annually is acceptable.

The need for a standardised and internationally accepted index is obvious, but there continues to be research needs which may not be fulfilled with a simplified index. Over the past 20 to 30 years, different researchers have developed indices which suit their own research needs but do not allow comparison to assess the prevalence of tooth wear between countries and regions. Therefore, this new scoring system has been designed to allow existing and hopefully future indices to be collapsed and re-analysed. It will be important that this proposed system is validated against existing data or in field trials. In time, it should initiate a consensus within the scientific community and so avoid continued proliferation of indices. Finally, this process should lead to the development of an internationally accepted, standardised and validated index.
The structure of the BEWE is designed to allow fulfilling of most formal requirements generally formulated for indices. The grading includes four levels which is neither too precise nor too crude, and the threshold values should be easy to learn and to calibrate. In addition by removing the clear distinction between “enamel loss” and “dentine” exposed, it will not only evade diagnostic uncertainties but will open a broad applicability beyond the clinical situation. It can be used with study models or photographs which appear suitable for erosive wear as a surface phenomenon. Erosion already has been documented or diagnosed on study models and on photographs [ 10, 13, 15], and this could be of particular value in cross-sectional and incidence studies as well as for the monitoring of individual cases.
It will further allow a more reliable estimation of the severity of tooth surface loss on an individual basis rather than the current way to give data as “ x% of the subjects had at least one tooth with grade x or grade y erosion”, and so avoid an overestimate of the problem. The BEWE is ideal for screening studies, but a longer version is required for a more detailed investigation.
As to the field of dental care, the clinical value of the BEWE, as with the BPE, should be highly significant as a convenient diagnostic tool for GDPs and as a model to increase awareness assuming that this relatively new entity is not well recognised. Even in UK, where the prevalence and incidence of erosive wear is relatively high [ 7, 18], a questionnaire survey has shown that only one third of the practitioners noted erosion on a frequent basis and the majority underestimated the prevalence of the condition [ 6]. The benefit of a system that encourages the more careful examination of the dental hard tissues other than for caries is therefore obvious and is one further aim of the BEWE.
Anzeige
In addition to diagnosis and scoring, also a strategy for treatment is included in the BEWE. There are a number of reviews with respect to the prevention and therapy of erosive wear (e.g. [ 3, 16]), but it is not only the variety of recommendations which makes the management of the condition difficult for the GDP, but also the fact that these recommendations were not made with respect to the severity of tooth surface loss in an individual. The risk levels presented aim to guide the management of erosive wear and allow sufficient flexibility so that different countries can adapt the index without compromising their unique needs. The levels defined, however, are suggestions at the present stage and need an ongoing review process.

The BEWE is a basic structure to initiate the development of an internationally accepted, standardised and validated index. This is to provide on one hand a clear and defined structure for scientific and clinical use, but on the other to be amenable for further development. It will encourage clinicians, students and GDPs to pay more attention to erosive wear and hence will be beneficial for patient care. 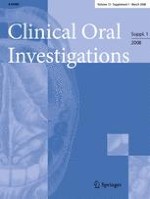 Tooth wear: the view of the anthropologist

How valid are current diagnostic criteria for dental erosion?

Pathological or physiological erosion—is there a relationship to age?

The evolution of tooth wear indices