A dual-loop controller permits the automated titration of propofol and remifentanil during anesthesia; it has never been used in intensive care after cardiac surgery. The goal of this preliminary study was to determine the efficacy of this controller to provide postoperative sedation in 19 adult cardiac surgery patients with a Bispectral Index target of 50. Results are presented as numbers (percentages) or medians [25th–75th percentiles]. The sedation period lasted 139 min [89–205] during which the Richmond Agitation Sedation Scale was at − 5 and the Behavioral Pain Scale score at three points for all patients and observation times but one (82 out of 83 assessments). Sedation time in the range 40–60 for the Bispectral Index was 87% [57–95]; one patient had a period of electrical silence defined as Suppression Ratio at least > 10% for more than 60 s. The time between the end of infusions and tracheal extubation was 84 min [63–129]. The Richmond Agitation Sedation Scale was 0 [0–0], 0 [− 1 to 0], and 0 [0–0] respectively during the 3 h following extubation while the verbal numerical pain scores were 6 [4.5–7], 5 [4–6], and 2 [0–5]. Mean arterial pressure decreased during sedation requiring therapeutic interventions, mainly vascular filling in 15 (79%) patients. Automated sedation device was discontinued in two patients for hemodynamic instability. No patient had awareness of the postoperative sedation period. Dual closed-loop can provide postoperative sedation after cardiac surgery but the choice of the depth of sedation should take into account the risk of hypotension. 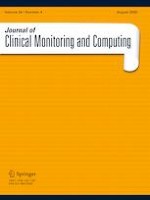