The optimal first-line treatment for advanced low-grade non-Hodgkin lymphomas (LG-NHL) is still highly debated. Recently, the StiL and the BRIGHT trials showed that the combination of rituximab and bendamustine (R-B) is non-inferior to rituximab, cyclophosphamide, doxorubicin, vincristine, and prednisone (R-CHOP) with a better toxicity profile. Utilizing a retrospective analysis, we compared the efficacy and safety of both regimens in clinical practice. From November 1995 to January 2014, 263 LG-NHL patients treated with either R-B or R-CHOP were retrospectively assessed in seven European cancer centers. Ninety patients were treated with R-B and 173 with R-CHOP. Overall response rate was 94 and 92 % for the R-B and the R-CHOP group, respectively. The percentage of complete response was similar for both groups (63 vs. 66 % with R-B and R-CHOP, respectively; p = 0.8). R-B was better tolerated and less toxic than R-CHOP. The median follow-up was 6.8 and 5.9 years for the R-CHOP and the R-B group, respectively. Overall, no difference in progression-free survival (PFS) (108 vs. 110 months; p = 0.1) was observed in the R-B group compared to the R-CHOP cohort. Nevertheless, R-B significantly prolonged PFS in FL patients (152 and 132 months in the R-B and R-CHOP group, respectively; p = 0.05). However, this result was not verified in multivariate analysis probably due to the limits of the present study. We confirm that the R-B regimen administered in patients with LG-NHL is an effective and less toxic therapeutic option than R-CHOP in clinical practice. 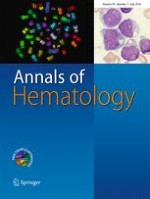 Pruritus in primary myelofibrosis: management options in the era of JAK inhibitors