Stenting as a bridge to surgery (SBTS) can transform an emergency surgery (ES) into an elective surgery in patients with symptomatic left-sided malignant colonic obstruction. Concerns have been raised regarding short-term morbidity and long-term oncologic outcomes, with contrasting results reported in the literature. Our main aim is to evaluate not only long-term oncologic outcomes but also short-term postoperative outcomes of stented patients who underwent elective surgery compared to those who had ES.

From January 2006 to May 2012, we retrospectively identified patients with confirmed left-sided colorectal cancer obstruction. This was done in two centers of reference of colorectal diseases in southern Spain with patients who were treated with curative intent either with ES or SBTS. The short- and long-term results were compared between both groups.

The use of SBTS reduces ostomy rates in patients with obstructive colon malignancies. Long-term survival results are similar. Patients in the SBTS group with stage III AJCC status showed a higher 5-year recurrence-free survival rate than those in the ES group. 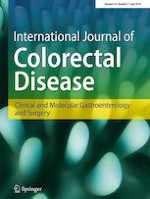 High prevalence of hidradenitis suppurativa in patients with perianal fistula

Improving treatment of patients with inflammatory bowel diseases: a controlled trial of a multifaceted intervention in two German cities