Familial Mediterranean fever (FMF) is a systemic autoinflammatory disease, which presents with recurrent episodes of fever, serositis, synovial inflammation and various different clinical features. In parallel with the geographical distribution of FMF, the prevalence is notably higher in some population groups including Turks, Jews, Armenians and Arabs. The aim of this study was to assess FMF articles published between 2010 and 2019 bibliometrically and to present up-to-date data. This bibliometric research was conducted on the Scopus database. The key term ''familial Mediterranean fever'' was utilized to generate the publication list. The number of articles, active countries journals, prolific authors and citation data were determined. Visualization maps that revealed collaboration networks were also created. The number of FMF articles displayed a stable trend between 2010 and 2019 (p > 0.05). The top five countries according to the number of articles were Turkey (n = 473; 52.90%), Israel (n = 86; 9.61%), Japan (n = 39; 4.36%), Italy (n = 38; 4.25%) and the USA (n = 37; 4.13%. Italy, the USA and France were ranked as the top three countries for the average number of citations per article. Rheumatology International, Clinical Rheumatology, Clinical and Experimental Rheumatology, Annals of Rheumatic Diseases and Pediatric Rheumatology were the top five journals according to the number of FMF articles. The geographical distribution of FMF was seen to affect the article production of countries. Although Turkey dominated the field in the number of articles, it was not at the forefront in the average number of citations. To increase the production of articles in the field of FMF, it is necessary to support researchers in countries other than those which are already strongly active. 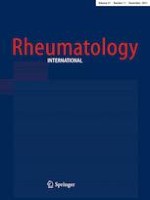 Methotrexate and interstitial lung disease. Is there a real causative factor?

Managing ANCA-associated vasculitis during the COVID-19 pandemic: results from an online survey