Major bile duct injury (MBDI) remains frequent after laparoscopic cholecystectomy (LC) reaching 0.3 to 0.6 % and is associated with a significant mortality rate. The aim of this study was to retrospectively analyze the factors likely to influence the long-term results of surgical repair for MBDI occurring after LC.

Medical records of patients referred to our referral center from January 1992 to January 2010 for management of bile duct injury following LC were retrospectively analyzed, and patients with MBDI were identified. Clinicopathological factors likely to influence long-term results after surgical repair were assessed by univariate and multivariable analysis.

When MBDI occurs following LC, HJ seems to be the optimal treatment but should not be performed during a sepsis period. Long-term results are significantly altered by the presence of a biliary cirrhosis at time of repair. 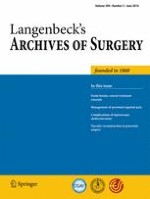 Surgery for incarcerated hernia: short-term outcome with or without mesh