Delta-shaped anastomosis is an established procedure for intracorporeal Billroth-I reconstruction (B-I). However, this procedure has several technical and economic problems. The aim of the current study was to present the technique of B-I using an overlap method (overlap B-I), which is a side-to-side intracorporeal gastroduodenostomy in laparoscopic distal gastrectomy (LDG), and to evaluate the short- and long-term outcomes of this overlap B-I procedure.

We retrospectively reviewed the medical records of 533 patients who underwent LDG with overlap B-I (n = 247) or Roux-en-Y reconstruction (R-Y) (n = 286). Patients with overlap B-I were propensity score matched to patients with R-Y in a 1:1 ratio. Short- and long-term outcomes of the two procedures were compared after matching.

In the total cohort, anastomosis-related complications occurred in 2.4% of patients with overlap B-I, and 3.2% of those with R-Y (P = 0.794). Morbidity rate, including anastomosis-related complications, and postoperative course were comparable after overlap B-I performed by qualified versus general surgeons. Of 247 patients with overlap B-I, 169 could be matched. After matching, morbidity rate and postoperative course were comparable between the two procedures. Median operation time was significantly shorter for overlap B-I (205 min) than R-Y (252 min; P < 0.001). The incidence of readmission due to gastrointestinal complications was significantly lesser after overlap B-I (2.4%) compared with R-Y (21.9%; P < 0.001). The main causes of readmission after R-Y were bowel obstruction (7.3%) and gallstones (8.0%). Regarding the development of common bile duct (CBD) stones, 11 patients (3.8%) who underwent R-Y were readmitted due to CBD stones, whereas no patients who underwent B-I developed CBD stones.

Overlap B-I is feasible and safe, even when performed by general surgeons. B-I was superior to R-Y concerning operation time and readmission due to gastrointestinal complications. 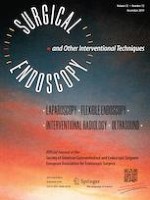