Multiple organ damage in severe acute respiratory syndrome (SARS) patients is common; however, the pathogenesis remains controversial. This study was to determine whether the damage was correlated with expression of the SARS coronavirus receptor, angiotensin converting enzyme 2 (ACE2), in different organs, especially in the endocrine tissues of the pancreas, and to elucidate the pathogenesis of glucose intolerance in SARS patients. The effect of clinical variables on survival was estimated in 135 SARS patients who died, 385 hospitalized SARS patients who survived, and 19 patients with non-SARS pneumonia. A total of 39 SARS patients who had no previous diabetes and received no steroid treatment were compared to 39 matched healthy siblings during a 3-year follow-up period. The pattern of SARS coronavirus receptor-ACE2 proteins in different human organs was also studied. Significant elevations in oxygen saturation, serum creatinine, lactate dehydrogenase, creatine kinase MB isoenzyme, and fasting plasma glucose (FPG), but not in alanine transaminase were predictors for death. Abundant ACE2 immunostaining was found in lung, kidney, heart, and islets of pancreas, but not in hepatocytes. Twenty of the 39 followed-up patients were diabetic during hospitalization. After 3 years, only two of these patients had diabetes. Compared with their non-SARS siblings, these patients exhibited no significant differences in FPG, postprandial glucose (PPG), and insulin levels. The organ involvements of SARS correlated with organ expression of ACE2. The localization of ACE2 expression in the endocrine part of the pancreas suggests that SARS coronavirus enters islets using ACE2 as its receptor and damages islets causing acute diabetes.
Anzeige 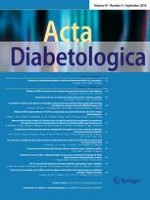