To determine the concentration after a single dose of generic 0.05% difluprednate and commercial difluprednate in the aqueous humor, cornea, and conjunctiva of New Zealand rabbits, a preclinical study in 72 male New Zealand white rabbits was performed. A single dose (50 μL) of two 0.05% difluprednate ophthalmic formulations was instilled in both eyes. Conjunctiva, cornea, and aqueous humor samples were collected at nine time points over 8 h (four animals per time point). The active metabolite of difluprednate, 17-difluoroprednisolone-butyrate (DFB), concentrations was quantified using HPLC.

Measurable levels of DFB were quantified in all three ocular tissues. After a single instillation, the highest concentration of difluprednate was found between 30 and 60 min in the conjunctiva, cornea, and aqueous humor, respectively. There was no significant difference between both formulations in any tissue at any time point. After 3 h, no metabolites of either emulsion were found in any tissue. 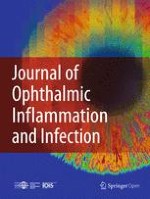 Dabrafenib for cutaneous melanoma infiltrating the vitreous: regression of metastasis and occurrence of uveitis as a secondary effect

Endogenous endophthalmitis due to Roseomonas mucosa presenting as a subretinal abscess