A biomarker is an indicator of a particular disease. It is generally used to define the presence (diagnostic biomarker), severity, progression (prognostic biomarker) of a condition and/or its response to a specific treatment (predictive biomarker). Biomarkers can be specific cells, enzymes, hormones, genes or gene products, which can be detected and measured in parts of the body such as blood, urine or tissue. Therefore, biomarkers have been suggested to play an important role in both the clinical assessment and the management of patients, as well as in the research setting. Recently, interest has gathered in urinary biomarkers as a tool to assess overactive bladder (OAB), potentially playing a role in the diagnosis, disease progression and monitoring response to treatment. Urinary biomarkers identified so far include nerve growth factor (NGF), brain-derived neurotrophic factor (BDNF), prostaglandins, cytokines and C-reactive protein. The aim of this review was to review the published literature on biomarkers in OAB. A literature review using Pub Med, clinicaltrials.gov and the controlled trials online registries was performed from 1970 up to June 2012. The search keywords were: the International Continence Society (ICS) definition of "OAB", “nerve growth fac- tor” (NGF), “brain derived growth factor” (BDNF), “prostaglandins,” “cytokines,” “genetic biomarkers” and “C reactive protein”.
The results were limited for fully published English-language articles. The search was then subsequently expanded to include urinary biomarkers in interstitial cystitis and bladder pain where relevant. Each of the studies/articles was reviewed, interpreted and discussed to consider the role of urinary biomarkers in OAB. Using the search criteria, a total of 20 studies (animal and human) that investigated the role of urinary biomarkers in OAB were identified. Full text versions of these articles were obtained and reviewed. Studies on NGF suggested that urinary levels were higher in OAB patients and decreased with antimuscarinic and botulinum toxin treatment. BDNF studies have demonstrated raised levels in OAB and also increased levels in situations of acute bladder inflammation. The role of urinary prostaglandins, cytokines and CRP does not appear to be specific to the OAB disease process according to the current available evidence. Based on the evidence so far NGF and BDNF appear to be the most promising biomarkers in OAB. Although still in their infancy these neurotrophic factors could potentially diagnose OAB, replacing urodynamics and aiding in monitoring disease progression and response to treatment in addition to clinical symptoms. 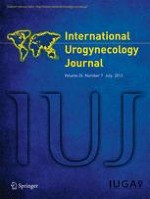 Three-dimensional endovaginal ultrasound examination following injection of Macroplastique for stress urinary incontinence: outcomes based on location and periurethral distribution of the bulking agent