Myocardial infarctions go along with biomechanical stress, i.e. stretching of muscle fibres, and the expression of certain marker molecules. We tested if two of those markers, endothelin-1 (ET-1) and growth differentiation factor 15 (GDF-15), can be used as immunohistochemical markers for myocardial ischaemia/infarctions. The study included experiments with an animal model, the isolated perfused Langendorff heart, as well as the investigation of human tissue samples drawn during autopsies. The overall picture of our results showed that GDF-15 is very sensitive and expressed very fast, not only as a consequence of ischaemia/infarctions, but also under other circumstances. Even an expression only caused by agony had to be discussed. ET-1, on the other hand, was less sensitive but only positive in those human cases with ischaemia/infarction that also showed typical alterations in conventional histology. Therefore, both markers did not proof to be a suitable diagnostic tool for myocardial infarctions. However, positive staining for ET-1 was also seen in rats’ hearts that suffered from arrhythmias after electric shock and in the myocardium of the right ventricle in human control cases in which a right heart failure has to be discussed. Thus, especially ET-1 should be subject of further studies that focus on these pathologies. 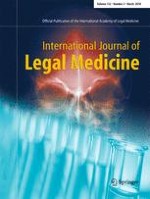 Developmental validation of a 6-dye STR kit with 27 loci