Several species of animals are used as a model to study human anterior cruciate ligament (ACL) reconstruction. In many animals, three bundles were clearly discernible during dissection in the ACL. However, there are few reports about the biomechanical role of each bundle in the porcine knee. The purpose of this study is to investigate the role of each of the three bundles in the porcine knee, especially the intermediate bundle. Ten porcine knees were tested using a robotic/universal forcemoment sensor system. This system applied anterior loading of 89 N at 30°, 60° and 90° of flexion, and a combined 7 Nm valgus and 4 Nm internal tibial torque at 30° and 60° of flexion before and after each bundle was selectively cut. The in situ force (N) for each bundle of the ACL was measured. Both intermediate (IM) bundle and postero-lateral (PL) bundle had significantly lower in situ force than the antero-medial (AM) bundle in anterior loading. The IM and PL bundles carried a larger proportion of the force under the torsional loads than the anterior loads. But IM bundle had a significant lower in situ force during the combined torque at 60° of knee flexion, when compared intact ACL. In summary, IM bundle has a subordinate role to the AM and PL bundles. AM bundle is more dominant than IM and PL bundles. The porcine knee is a suitable model for ACL studies, especially for AP stability. 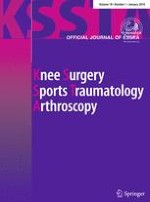 Anatomy is the key

The role of anterior cruciate ligament reconstruction in the older patients, 55 years or above

Mucoid degeneration of the posterior cruciate ligament: a case report