Bisphosphonates (BPs) are clinically used for the treatment of bone metabolic abnormalities because they are powerful inhibitors of bone resorption. Osteonecrosis of the jaw has been observed after tooth extraction in a considerable number of BP-treated cancer patients, but the reason for this is not known. We studied the effects of BP on extraction socket healing in rats that were pretreated with BP prior to tooth extraction. Male Wistar rats (approximately 5 weeks old) were divided into experimental (BP) and control groups. In both groups, maxillary right second molars were extracted under general anesthesia. BP group rats were injected with 50 μl (1.0 mg/kg) alendronate into the right buccal alveolar bone every 4 days for 14 days, starting 2 days before tooth extraction. Control group rats were injected with physiological saline instead of alendronate. Rats were euthanized 3, 7, 10 or 14 days after tooth extraction, and maxillary bones were collected. Bone morphometric analysis using microfocus X-ray CT images and calculation of bone-resorption parameters based on hematoxylin and eosin or TRAP-stained pathological sections of the molar region showed that new bone formation in the extraction socket was delayed in the BP group relative to the control group during the first 7 days after extraction. A subsequent increase in new bone formation showed that bone resorption in the BP rats was eventually inhibited. This delay in initial healing may explain the jaw osteonecrosis observed in some BP-treated cancer patients. 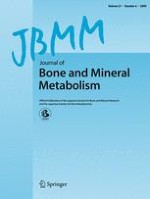 A review of drug-induced hypocalcemia

Effect of vitamin D supplementation in the institutionalized elderly

A case of primary hyperparathyroidism with severe bone and renal changes