Pregnancy and lactation-associated osteoporosis (PLO) is an uncommon condition characterized by the occurrence of fracture(s) during late pregnancy or the puerperium. The aetiology is uncertain, and its management and natural history poorly defined.

We report a series of 11 women with PLO seen at our institution over the past 20 years, with follow-up ranging from 1 to 19 years.

Ten women presented with painful low-trauma vertebral fractures, at a median of 1 month postpartum. In nine cases the fractures were multiple (median: 3, range: 2–5). At least one recognised risk factor for osteoporosis (low body weight, smoking history, family history of osteoporosis/fracture, vitamin D insufficiency) was present in nine patients. Bone density was in the osteoporotic range at the spine (mean T score: −2.8), with less marked reduction at the proximal femur (mean T score: −1.9). Nine patients received bisphosphonate treatment, for a median duration of 24 months. In the five women who received a bisphosphonate within 1 year of presentation, spinal bone density increased by 23% over baseline values after 2 years of treatment (p=0.0014). Of the 5 women who had subsequent pregnancies, one, who had declined bisphosphonate therapy after the initial presentation, sustained a fracture in the postpartum period. Two patients (both of whom were followed for at least 10 years) sustained fractures outside of pregnancy.

PLO is therefore associated with significant morbidity, a high prevalence of recognized risk factors for osteoporosis and a risk of recurrence in subsequent pregnancies. Bisphosphonate therapy administered soon after presentation substantially increases spinal bone density in patients with PLO. 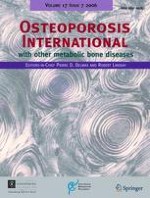 Reply to the letter by W. Pluskiewicz

Dancing for bone health: a 3-year longitudinal study of bone mineral accrual across puberty in female non-elite dancers and controls

The cost-effectiveness of risedronate in the treatment of osteoporosis: an international perspective

Vitamin D insufficiency and the blunted PTH response in established osteoporosis: the role of magnesium deficiency