This was a prospective observational study of 30 patients from two gynecologic surgical settings with experience in DIE surgery. All patients underwent preoperative standardized investigation including detailed evaluation of LUTS and urodynamic studies. During surgery, endometriosis locations were recorded and correlated to symptoms and urodynamic observations.

Endometriosis infiltrating the bladder wall is associated with painful bladder symptoms. Dysfunctional voiding suggests an impairment of the inferior hypogastric plexus by posterior DIE. Clinical preoperative evaluation of bladder function should be systematic; urodynamic tests could be of interest in selected patients with DIE. Endometriosis may be a major cause of bladder pain syndrome. 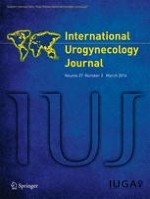 Polypropylene mesh slings and cancer: An incidental finding or association?

A novel insight into the treatment of an intravesical eroded mesh: endoscopic-assisted cystoscopic approach