Blastocystis is an enteric parasite that inhabits the gastrointestinal tract of humans and many animals. This emerging parasite has a worldwide distribution. It is often identified as the most common eukaryotic organism reported in human fecal samples. This parasite is recognized and diagnosed more often than ever before. Furthermore, some strains develop resistance against currently recommended drugs, such as metronidazole; therefore, the use of natural remedies or special diets has many positive aspects that may address this problem. The goal of this review is to compare natural treatments and various diets against the efficacy of drugs, and describe their influence on the composition of the gut microbiota, which affects Blastocystis growth and the occurrence of symptoms. This article reviews important work in the literature, including the classification, life cycle, epidemiology, pathogenesis, pathogenicity, genetics, biology, and treatment of Blastocystis. It also includes a review of the current knowledge about human gut microbiota and various diets proposed for Blastocystis eradication. The literature has revealed that garlic, ginger, some medical plants, and many spices contain the most effective organic compounds for parasite eradication. They work by inhibiting parasitic enzymes and nucleic acids, as well as by inhibiting protein synthesis. The efficacy of any specific organic compound depends on the Blastocystis subtype, and, consequently, on its immunity to treatment. In conclusion, the article discusses the findings that human gut microbiota composition triggers important mechanisms at the molecular level, and, thus, has a crucial influence on the parasitic pathogenicity. 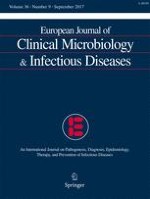 Erratum to: A new concept and a comprehensive evaluation of SYSMEX UF-1000i flow cytometer to identify culture-negative urine specimens in patients with UTI

Efficacy of palivizumab prophylaxis on the frequency of RSV-associated lower respiratory tract infections in preterm infants: determination of the ideal target population for prophylaxis