Many previous studies have focused on the postoperative complication of postoperative knee pain, infection, knee prosthesis loosening, periprosthetic fractures, and so on. There have been few studies focused on postoperative ecchymosis formation surrounding the wound of the TKA site. A certain degree of effect on the early functional recovery of the patients may occur due to the mental stress caused by the ecchymosis, which raises doubts regarding the success of the surgery. Therefore, it is particularly important to understand the risk factors for postsurgical ecchymosis formation after TKA, and specific measures for preventing ecchymosis should be taken. In this study, we reviewed the record of patients who received TKAs in our hospital, and a comprehensive analysis and assessment was conducted regarding 15 clinical factors causing postsurgical ecchymosis formation.

The records of 102 patients who received unilateral TKAs between January 2007 and May 2010 were retrospectively analyzed. Patients were divided into two groups based on the occurrence of ecchymosis.

Blood transfusion and drainage catheter clamping after TKA due to excessive blood suction were associated with higher risks for ecchymosis formation surrounding the surgical site. 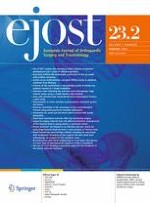 Porous tantalum rod implant is an effective and safe choice for early-stage femoral head necrosis: a meta-analysis of clinical trials