The medical records were reviewed of all patients undergoing resection of an IPMN at Johns Hopkins Hospital from June 1997 to August 2016. Potential risk factors of high-grade dysplasia and associated adenocarcinoma were identified through a multivariate logistic regression model.

IPMN patients are more likely to have non-O blood groups than controls, but type O blood group carriers had higher odds of having high-grade dysplasia in their IPMN. These results indicate blood group status may have different effects on the risk and progression of IPMNs. 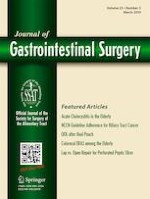