Primary malignant bone tumors are among the rarest types of cancer [ 1]. In the United States, these entities are responsible for only 0.2% of all malignant neoplasia diagnosed per year [ 2]. Two of the most common primary malignant bone tumors are the osteosarcoma (OS) (35%) and the Ewing-Sarcoma (ES) (16%) [ 1]. OS can develop at any age, but like ES, it is particularly common in children and young adults and makes up a significant percentage (up to 8%) of cancer types in these age groups [ 3].
The treatment of primary malignant bone tumors consists of surgical resection, chemotherapy and radiotherapy in cases of ES. Recent advances in the treatment have significantly improved the survival of patients who suffer from these tumors. Nonetheless, the 5-year survival is still very low (4–87% for OS, 20–70% for ES) [ 4, 5].
Anzeige
Surviving patients are facing different problems in their everyday lives. Apart from the biological aspects of these tumors, psychological and social challenges should not be forgotten.
Currently, the literature referring to social and psychological effects in patients with primary malignant bone tumors is limited. Some studies aimed to evaluate QoL in patients with primary bone tumors [ 6– 8]. Other studies aimed to assess the body image of tumor patients [ 9, 10]. One study analyzed the self-esteem of cancer patients [ 11].
The aim of this study was to compare QoL, body image and self- esteem of patients with primary malignant bone tumors (osteosarcoma and Ewing-Sarcoma) to a healthy control group. Four different self-administered questionnaires were used. The Short-Form 36 (SF-36) questionnaire was used to assess QoL, the Multi-Dimensional Body-Self Relation Questionnaire (MBSRQ) to assess body image and the Rosenberg Self-Esteem Scale (RSE) to assess self-esteem. Functionality of the affected limb was evaluated using the Musculoskeletal Tumor Society Score (MSTS).

205 patients (121 OS, 84 ES; 124 male, 81 female) were treated at the authors’ institution between Jan 1989 and May 2015. 112 (54.6%) surviving patients (69 male, 43 female) were invited to participate in the study. They received a letter with a description and an invitation to the study. A total of 56 (50%) patients (39 male, 17 female, mean age 33.9 [± 14.3] years) with osteosarcoma and Ewing-Sarcoma could be contacted and were included in the study (mean follow-up: 9.1 [± 6.6] years, range of follow-up 8 months–22 years). Inclusion criteria were the ability to speak German fluently and the ability to read and write ( to fill in the questionnaires). Exclusion criteria were ages under 16 years and over 85 years. There were 34 (60.7%) osteosarcoma patients and 22 (39.3%) Ewing-Sarcoma patients. The demographical data of all patients can be seen in Table 1.
Table 1
Demographic data of patients and controls
Anzeige
After the invitation letters were sent to the patients, they were contacted by phone and asked to give their personal email address. Those patients who could not be reached, received five attempts by phone to collect the data. All patients that could be contacted took part in this study. Using the online survey platform http://​www.​surveymonkey.​com (SurveyMonkey © Palo Alto, California, USA) a questionnaire was designed and sent to all participants. Forty-nine patients filled in the online questionnaire, seven patients could not name an email address and were, therefore, interviewed by telephone. Patients’ demographic and clinical data were extracted from the tumor database of the authors’ institution including age (in years), sex (male or female), medical history (diagnosis, conducted treatment, localization of tumor). According to their clinical and demographic data patients were divided into different groups: (1) patients with primary tumors located in the lower limb (including pelvis); (2) patients with primary tumors located in the upper limb (including shoulder and clavicle); and (3) patients with primary tumors located in the trunk. Furthermore, patients were divided into four groups based on whether they did or did not receive chemotherapy, and whether they did or did not receive radiotherapy. For patient's characteristics see Table 2.
Table 2
Demographic data of patient groups
Medical students of the Medical University Graz were recruited as healthy controls. The same inclusion/exclusion criteria were applied as above. A total of 58 (31 male, 27 female, mean age 24.4 [± − 3.1] years) students were enrolled into the study. For demographic data of healthy controls see Table 1.

The SF-36 is a questionnaire designed to assess generic health using 36 items, that cover eight health-related quality of life domains: physical functioning (PF), role limitation due to physical difficulties (RF), bodily pain (BP), general health (GH), vitality (V), social function (SF), role limitation (RE) due to emotional difficulties and mental health (MH). Each domain is scored, summed and transformed differently. The result is a score from 0 (worst quality of life) to 100 (best quality of life) for each domain. It is a standardized questionnaire used globally, that is not specific to age, disease or treatment group [ 12].

The German version of the MBSRQ is a 71-item, self-reported questionnaire to assess ones’ body image construction in two dimensions: “evaluation” and “orientation”. It is divided into seven different subscales: “health evaluation” (HE) measuring feelings of physical health; “health orientation” (HO) measuring extent of investment to maintain health; “appearance evaluation” (AE) focusing on physical attractiveness and satisfaction of ones’ appearance; “appearance orientation” (AO) evaluating the amount of work put in ones’ look; “fitness evaluation” (FE) measuring feelings of being physical fit; “fitness orientation” (FO) assessing the extent of investment of being physically fit; and “illness orientation” (IO) focusing on the extent of reaction when becoming ill. Moreover, 17 items assess ones’ satisfaction to certain body areas (SB), the estimation of ones’ weight and fear of obesity. Each item is answered on a 5-point Likert scale ranging from 1 (“definitely disagree”) to 5 (“definitely agree”). The ten different subscales are scored with a computer- assisted formula [ 15, 16].

The questionnaire published by the Musculoskeletal Tumor Society in 1989 is a widely used tool to assess functions of limbs after surgical resections of musculoskeletal tumors. It contains six questions evaluating function on a scale from 0 (poor) to 5 (very good). Scores are summed and give a maximum of 30 points, where high scores indicate a good function [ 17].

Each author certifies that he or she has no commercial associations (e.g., consultancies, stock ownership, equity interest, patent/licensing arrangements, etc.) that might pose a conflict of interest in connection with the submitted article.

This study was performed in accordance with the Helsinki Declaration and approved by the institutional review board (EK 27-011 14/15). All participants gave informed consent and had the opportunity to leave the study at any time.

Regarding the QoL and the SF-36, significantly lower scores for patients compared to control were found in the subscales assessing physical health: PF, RF, BP and GH. No significant differences were detected in the categories evaluating the psychological health (Table 4).
Table 4
Statistical comparison of different groups
* Statistically significant
ns non significant
Anzeige

Patients showed a reduced body image compared to control, with significantly lower scores in the overall score of the MBSRQ and in six different subscales (AE, FE, FO, HE, HO, SB) (Table 4).

Patients had a slightly lower RSE score compared to control, however, no statistically significant differences were observed (Table 4).

On behalf of all authors, the corresponding author states that there is no conflict of interest.
Open AccessThis article is distributed under the terms of the Creative Commons Attribution 4.0 International License ( http://​creativecommons.​org/​licenses/​by/​4.​0/​), which permits unrestricted use, distribution, and reproduction in any medium, provided you give appropriate credit to the original author(s) and the source, provide a link to the Creative Commons license, and indicate if changes were made. 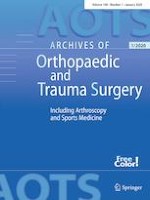 Regional differences between the US, Scandinavia, and South Korea in patient demographics and patient-reported outcomes for primary total knee arthroplasty