In a population-based study of 2,003 men and 2,134 women, the relationship between the osteoprotegerin (OPG)/factor-κB ligand (RANKL) system and bone mineral density (BMD) and changes in BMD was examined.

BMD was negatively associated with OPG at baseline in both men and women (p trend over OPG levels = 0.01 and 0.007, respectively, after adjustments for age, and other confounders). In postmenopausal women not on hormone replacement therapy, bone loss increased with increasing OPG (p = 0.005), whereas no relationship was found in men, premenopausal women, or postmenopausal women on HRT (p ≥ 0.28). BMD at baseline and BMD changes were not related to RANKL levels in any of the groups (p ≥ 0.14). 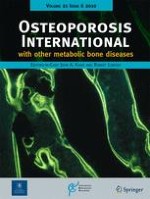 Of mice and men: divergent risks of teriparatide-induced osteosarcoma

Measurement uncertainty for the analysis of serum 25-hydroxyvitamin D: response to Stepman and Thienpont