The aims of this analysis were to establish an integrated population pharmacokinetic (PK) model of olaparib in patients with solid tumors and to bridge the PK of olaparib between capsule and tablet formulations.

The population PK model was developed using plasma concentration data from 659 patients in 11 phase I, II, and III studies of olaparib tablets/capsules monotherapy. Relative bioavailability between the tablet and capsule formulations was estimated and the relative exposure between olaparib tablet and capsule therapeutic doses was further assessed.

The concentration–time profile was described using a two-compartment model with sequential zero- and first-order absorption and first-order elimination for both capsules and tablets with different absorption parameters. Multiple-dose clearance compared with single-dose clearance was reduced by approximately 15% (auto-inhibition). Disease severity had an impact on olaparib clearance, and tablet strength had an impact on Ka. The olaparib geometric mean area under the curve (AUC) and maximal concentration (Cmax) following a single 300 mg tablet were 42.1 μg h/mL and 5.8 μg/mL, respectively, and the steady-state geometric mean AUC and Cmax following a 300 mg tablet twice daily were 49.0 μg h/mL and 7.7 μg/mL, respectively. The relative exposure (AUC) of the 300 mg tablet formulation is 13% higher than the 400 mg capsule formulation. 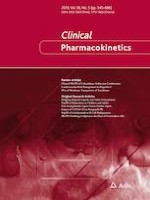 Pharmacogenetics of Membrane Transporters of Tacrolimus in Solid Organ Transplantation

Correction to: Pharmacokinetic and Pharmacodynamic Modeling to Optimize the Dose of Vestronidase Alfa, an Enzyme Replacement Therapy for Treatment of Patients with Mucopolysaccharidosis Type VII: Results from Three Trials

Clinical Pharmacokinetics and Pharmacodynamics of Ceftazidime–Avibactam Combination: A Model-Informed Strategy for its Clinical Development

Pharmacokinetic and Pharmacodynamic Modeling to Optimize the Dose of Vestronidase Alfa, an Enzyme Replacement Therapy for Treatment of Patients with Mucopolysaccharidosis Type VII: Results from Three Trials