Between July 2014 and September 2017, 26 patients (aged from 12 to 22 months) underwent scrotal hypospadias repair. Short and non-elastic urethral plate is divided. Buccal mucosa graft is harvested from the inner cheek, and designed in a special “watch” shape, with the spherical part in the middle and two rectangular parts on both sides. Tunica albuginea is opened ventrally for penile straightening and grafted to the spherical part of the “watch-shaped” buccal mucosa with 6–8 “U-shape” stitches. The rectangular parts are fixed to the tip of the glans distally and native urethral meatus proximally. Longitudinal dorsal skin flap is harvested, button-holed ventrally and joined with buccal graft. Penile skin reconstruction is performed using available penile skin.

The mean follow-up was 22 months (range from 9 to 46 months). Satisfactory results were achieved in 22 patients. Two urethral fistulas were successfully repaired by minor surgery after 3 months, while one meatal stenosis and one urethral diverticulum were successfully treated by temporary urethral dilation. There were no cases of residual curvature.

Specially shaped buccal mucosa graft for simultaneous curvature correction and urethroplasty could be a good choice for single-stage repair of scrotal hypospadias with severe curvature. 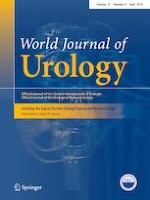 Urologic trauma and reconstruction: where are we today