Background: There are few reports of overall strength of laparoscopic and open incisional hernia repair. Methods: After anesthesia, a 2-inch circular defect was made in the abdominal wall of 28 female swine. Gore-Tex DualMesh Biomaterial (W. L. Gore & Associates, Flagstaff, AZ) was used for all repairs. Sixteen animals underwent open repair and 12 underwent laparoscopic repair. Burst strength was detected within 2 weeks and at 6 weeks by euthanizing the animals and insufflating the abdominal cavity with water while measuring the intraabdominal pressure until it could no longer be pressurized. Results: Three events occurred after insufflation: rupture around patch (R), dissection from insufflation or pressure monitoring sites (D), or rectal prolapse (P). Failure after open early repair occurred at 289 (range 219–388) mmHg with 7-R, 1-P and late 289 (196–343) mmHg with 1-R, 6-P. Failure after laparoscopic early repair occurred at 259 (191–388) mmHg with 4-R, 1-P, 1-D and late 291 (140–330) mmHg with 2-R, 1-P, 3-D. Late groups were less likely to rupture. Conclusion: Both hernia repairs are durable at early and late periods. Tissue ingrowth adds to repair strength. We could not show that one repair was stronger than the other. Nonetheless, laparoscopic repair tended to degrade by dissection, which was our highest pressure event. 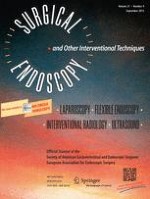 Teaching, training, and clinical surgery: are we making a difference?

Laparoscopic resection of the pancreas: a feasibility study of the short-term outcome