Our hypothesis was that the Achilles tendon healing process after surgical treatment would be promoted by PRP with a faster return to sports activities.

Thirty patients with Achilles tendon rupture and surgically treated with a combined mini-open and percutaneous technique were prospectively enroled in the study. Patients were alternately case-by-case assigned to Group A (control group; 15 patients) or Group B (study group; 15 patients). In Group B, PRP was locally infiltrated both during surgery and 14 days after surgery. Patients in both groups were followed up at 1, 3, 6 and 24 months post-operatively via physical examination, VAS, FAOS and VISA-A scales; ultrasonography (US) and MRI were also conducted at one and 6 months; at the 6-month follow-up, isokinetic and jumping capacity tests were also performed.

A substantial equivalence in structural and functional results in Achilles tendon ruptures surgically treated with and without addition of PRP is shown by present study. Clinical results, morphological features and jumping capability were similar in both groups. The addition of PRP to the surgical treatment of Achilles tendon rupture does not appear to offer superior clinical and functional results. 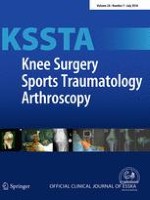 Biomechanical evaluation contribution of the acetabular labrum to hip stability