Due to a potential exposure to several definite or probable carcinogens, the IARC classified manufacturing of art glass, glass containers, and pressed ware as probably carcinogenic to humans in 1993 (Group 2A). Purpose of this study was to update the evidence from recently published scientific reports.

We searched for peer-reviewed articles published between 1993 and 2018 and combined result in terms of a meta-analysis. Overall, we considered twelve articles for a meta-analytic approach published after 1992. 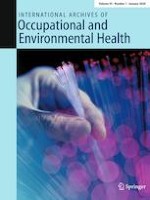 The relationship between anthropometric measures and cardiometabolic health in shift work: findings from the Atlantic PATH Cohort Study

Is the effect of work-related psychosocial exposure on depressive and anxiety disorders short-term, lagged or cumulative?

Is combining human service work with family caregiving associated with additional odds of emotional exhaustion and sickness absence? A cross-sectional study based on a Swedish cohort