The aim of this study was to monitor recent changes in the epidemiology of candidemia and in the antifungal susceptibility profiles of Candida isolates in one Italian region (Lombardy) in 2014–2015 in comparison with two other studies performed in the same area in 1997–1999 and in 2009.

A laboratory-based surveillance was conducted in 11 microbiology laboratories. Identification of Candida isolates from 868 episodes and antifungal susceptibility testing (YeastOne) was performed locally.

A progressive increase in the rate of candidemia up to 1.27/1000 admissions and 1.59/10,000 patient days was documented. In all the three surveys, Candida albicans remains the most frequently isolated species, ranging from 52 to 59 % of the etiology of BSIs. The epidemiological shift to the more resistant C. glabrata, observed between 1997–1999 and 2009 surveys, was not confirmed by our more recent data. The pattern of etiology of BSIs occurred in 2014–2015 overlaps that of the 90s. Acquired antifungal resistance is a rare event. No isolate had an amphoterin B minimal inhibitory concentration (MIC, mg/L) value higher than the epidemiological cutoff. All the echinocandin MIC distributions are typical for wild-type organisms except for those of two C. glabrata isolates. Fluconazole resistance declined from 24.9 % in the 2009 survey to 5.4 % in the recent one.

Data from regional surveys may highlight the influence of therapeutic practices on the epidemiology of Candida BSIs and may optimize empirical therapies. 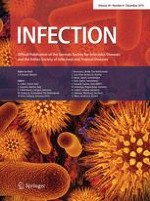 Measles, mumps, rubella, and varicella seroprevalence in refugees in Germany in 2015

Nosocomial candidemia in patients admitted to medicine wards compared to other wards: a multicentre study

Intensified colonisation screening according to the recommendations of the German Commission for Hospital Hygiene and Infectious Diseases Prevention (KRINKO): identification and containment of a Serratia marcescens outbreak in the neonatal intensive care unit, Jena, Germany, 2013–2014

A rare cause of infection, Raoultella planticola: emerging threat and new reservoir for carbapenem resistance