Multiple-site colonization with Candida species is commonly recognized as a major risk factor for invasive fungal infection in critically ill patients. The fungal colonization density could be of predictive value for the diagnosis of systemic candidiasis in high-risk surgical patients. Little is known about it in the medical ICU setting.

The colonization index (ratio of the number of culture-positive surveillance sites for Candida spp. to the number of sites cultured) was calculated weekly upon ICU admission until death or discharge. The 0.50 threshold was reached in 36 (39.1%) patients, almost exclusively in those with detectable fungal colonization upon ICU admission. The duration of broad-spectrum antibiotic therapy was found to be the main factor that independently promoted fungal growth as measured through the colonization index.

Candida spp. multiple-site colonization is frequently met among the critically ill medical patients. Broad-spectrum antibiotic therapy was found to promote fungal growth in patients with prior colonization. Since most of the invasive candidiasis in the ICU setting are thought to be subsequent to colonization in high-risk patients, reducing antibiotic use could be useful in preventing fungal infections. 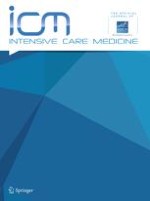 Pressure, flow and Occam’s Razor: a matter of “steal”?