Capillary morphogenesis gene 2 (CMG2) also known as anthrax toxin receptor 2 was identified as a gene being up-regulated in capillary morphogenesis. It has been shown to be involved in cell adhesion and motility which are critical functions for cancerous cells to disseminate. The present study aimed to examine the expression of CMG2 in breast cancer and its implication in the disease progression.

Breast primary tumours and background tissues were collected immediately after surgery and stored at −80 °C with approval by the local ethics committee, and written consent obtained from patients. The expression of CMG2 in 127 breast cancer tumour samples and 34 normal mammary tissues was determined using real-time PCR. Knockdown and over-expression in breast cancer cells were established using constructed plasmid vectors carrying either anti-CMG2 ribozyme or full-coding sequence of human CMG2. The effect on growth of breast cancer cells was examined using in vitro and in vivo models.

The CMG2 transcript levels were reduced in advanced tumours compared with its expression in tumours of early stage according to their TNM staging. The reduced expression was associated with shorter overall survival, p = 0.004 compared with patients who had higher expression. The knockdown of CMG2 resulted in an increased in vitro growth of MDA-MB-231 cells which express this gene at relatively higher levels. This is consistent with the finding from MCF-7 cells which express lower levels of CMG2 and exhibited reduced growth following over-expression of CMG2. The over-expression of CMG2 also demonstrated an inhibitory effect on in vivo growth of MCF-7 cells.

Reduced expression of CMG2 is associated with disease progression and poor prognosis of breast cancer. CMG2 has an inhibitory effect on growth of breast cancer cells. Further investigation is required to shed light on the prognostic and therapeutic potential of targeting this molecule. 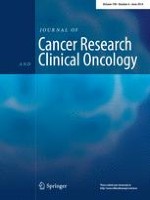 The importance of gender in patients with peritoneal metastases of appendiceal origin treated by cytoreduction and intraperitoneal chemotherapy: an analysis of 257 consecutive patients from an Australian centre