Clinically, the displacement of intravertebral fat into the circulation during vertebroplasty is reported to lead to problems in elderly patients and can represent a serious complication, especially when multiple levels have to be treated. An in vitro study has shown the feasibility of removing intravertebral fat by pulsed jet-lavage prior to vertebroplasty, potentially reducing the embolization of bone marrow fat from the vertebral bodies and alleviating the cardiovascular changes elicited by pulmonary fat embolism. In this in vivo study, percutaneous vertebroplasty using polymethylmethacrylate (PMMA) was performed in three lumbar vertebrae of 11 sheep. In six sheep (lavage group), pulsed jet-lavage was performed prior to injection of PMMA compared to the control group of five sheep receiving only PMMA vertebroplasty. Invasive recording of blood pressures was performed continuously until 60 min after the last injection. Cardiac output and arterial blood gas parameters were measured at selected time points. Post mortem, the injected cement volume was measured using CT and lung biopsies were processed for assessment of intravascular fat. Pulsed jet-lavage was feasible in the in vivo setting. In the control group, the injection of PMMA resulted in pulmonary fat embolism and a sudden and significant increase in mean pulmonary arterial pressure. Pulsed jet-lavage prevented any cardiovascular changes and significantly reduced the severity of bone marrow fat embolization. Even though significantly more cement had been injected into the lavaged vertebral bodies, significantly fewer intravascular fat emboli were identified in the lung tissue. Pulsed jet-lavage prevented the cardiovascular complications after PMMA vertebroplasty in sheep and alleviated the severity of pulmonary fat embolism. 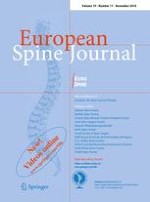 Anterior approaches to the cervicothoracic junction: a study on the surgical accessibility of three different corridors based on the CT images