Dr. Carl Prausnitz Giles was born in 1876 in Hamburg, Germany, as the son of Hamburg army physician Otto Prausnitz, and Edith Giles, daughter of George and Elizabeth Giles of Bonchurch, Isle of Wight, UK. Carl qualified in medicine at the German Universities of Leipzig, Kiel, and Breslau (now Wroclaw, Poland). He began his work at the Hamburg Hygiene Institute, undertaking diagnostic work on cholera, plague, typhoid, diphtheria, and tuberculosis.
Carl frequently visited his mother’s home in Bonchurch. He became proficient in both German and English and obtained British medical qualifications, MRCS and LRCP.
The key work for which he is mainly remembered, was the discovery of the principle responsible for the supersensitivity to cooked fish of his co-worker, Heinz Küstner. In a classic paper published in 1921, he showed this could be transferred to non-sensitive individuals. He called it reagin, eventually shown to be IgE antibody. The test demonstrating its existence, the Prausnitz-Küstner reaction was used for many years to demonstrate allergy in patients.
In 1926, Prausnitz was appointed Professor and Director of the Institute of Hygiene in Breslau. Due to his Jewish antecedents, in 1934 he was compulsorily retired from his Chair in Breslau and moved his family to England. In 1935, he moved to Bonchurch. At the age of 60 years, he embarked on a career in general practice in partnership with a childhood friend, Dr. Bruce Williamson. He took his mother’s maiden name and became Dr. CP Giles of Ventnor, Isle of Wight, UK.
Anzeige 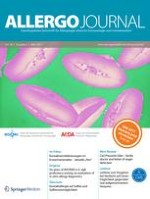