New techniques have substantially raised recanalization rates of mechanical thrombectomy in acute ischemic stroke in the last few years with initial prospective trials reporting good neurological outcome in up to 58 % of the cases. However some recent reports questioning the benefit of endovascular therapy have initiated a discussion about the importance of patient-selection. The purpose of this study was to investigate whether an elongation of the carotid artery affects the angiographic outcome of the recanalization procedure in middle cerebral artery (MCA)-occlusions.

The data of 54 patients with occlusions of the M1-segment who underwent mechanical thrombectomy were included. The lengths of the carotid arteries were measured using preinterventional computed tomography (CT)-angiograms. To take individual patient’s height into account these lengths were divided by the length of the spine from the tip of the dens to the bottom of the th3 vertebral body (referred to as carotid-to-spine (CS)-Ratio). Angiographic results were scored according to the modified thrombolysis in cerebral infarction (mTICI)-score.

In this retrospective analysis we report that carotid elongation does not affect angiographic results of mechanical thrombectomy in acute stroke. 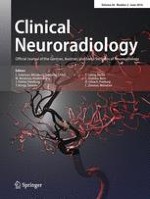 MRI Findings in Childhood PRES: What is Different than the Adults?