To report the findings in a 72-year-old man with neuronal intranuclear hyaline inclusion disease (NIHID) with the negative-type electroretinogram (ERG) and without night blindness.

NIHID was confirmed by skin biopsy. The ophthalmologic examinations revealed sluggish pupillary reflexes without visual disturbances and retinal abnormalities. The amplitudes of the dark-adapted 0.01 ERG was absent, and light-adapted 3 ERG and light-adapted 30 Hz flicker ERG were reduced in amplitude and delayed in implicit time. The rod system was more severely affected than the cone system, indicating that NIHID is classified as one of rod-cone dysfunction syndrome. The dark-adapted 3 ERG consisted of a markedly reduced b-wave with larger a-wave (negative ERG), but the amplitude of a-wave was smaller than normal.

Since the ophthalmoscopical findings and the subjective visual functions may be essentially normal, the characteristic ERG abnormalities can be an important findings in adult-onset NIHID without night blindness. 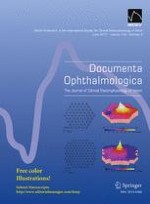 VEP and PERG in patients with multiple sclerosis, with and without a history of optic neuritis

ERG and other discriminators between advanced hydroxychloroquine retinopathy and retinitis pigmentosa

Pigmented and albino rats differ in their responses to moderate, acute and reversible intraocular pressure elevation