Bridging integrator 1 (BIN1) has showed outstanding tumor-suppressive potential via inhibiting c-MYC-mediated tumorigenesis. However, a frequent phosphorylation of c-MYC at Ser-62 site could block the BIN1/c-MYC interaction and limits the tumor-suppressive effect of BIN1. Cyclin-dependent kinase 5 (CDK5), a generally dysregulated protein in various carcinomas, can mediate c-MYC phosphorylation at Ser-62 site. However, whether the existence of CDK5 could block the BIN1/c-MYC interaction remains unclear.

The expression of CDK5 and BIN1 in non-small cell lung cancer (NSCLC) cell lines were measured. CDK5 was knocked down and overexpressed in H460 and PC9 cells, respectively. CCK-8, wound healing and transwell were used to detect the proliferation, migration and invasion ability of NSCLC cells. Tumor-bearing nude mouse model was built with H460 cells. Dinaciclib was added to realize the effect of CDK5 inhibition in vivo. NSCLC and matched para-carcinoma specimens were collected from 153 patients who underwent radical operation. IHC was performed to determine the expression of CDK5 in the specimens. Kaplan–Meier analysis was used to analyze the correlation between the postoperative survival and CDK5 expression. 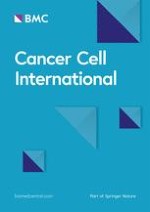 Prognostic value of YKL-40 in solid tumors: a meta-analysis of 41 cohort studies