The medial septum/diagonal band (MS/DB) is a relay region connecting the hypothalamus and brainstem with the hippocampus, and both the MS/DB and dorsal/ventral hippocampus receive strong topographic GABA/peptidergic projections from the nucleus incertus of the pontine tegmentum. The neuropeptide relaxin-3, released by these neurons, is the cognate ligand for a Gi/o-protein-coupled receptor, RXFP3, which is highly expressed within the MS/DB, and both cholinergic and GABAergic neurons in this region of rat brain receive relaxin-3 positive terminals/boutons. Comprehensive in vitro studies have demonstrated that the cell signaling pathways altered by RXFP3 stimulation, include inhibition of forskolin-activated cAMP levels and activation of ERK phosphorylation. In this study we investigated whether intracerebroventricular (icv) injection of RXFP3-A2, a selective relaxin-3 receptor agonist, altered ERK phosphorylation levels in the MS/DB of adult male rats. We subsequently assessed the neurochemical phenotype of phosphorylated (p) ERK-positive neurons in MS/DB after icv RXFP3-A2 administration by dual-label immunostaining for pERK and neuronal markers for cholinergic and GABAergic neurons. Central RXFP3-A2 injection significantly increased levels of pERK immunoreactivity (IR) in MS/DB at 20 and 90 min post-injection, compared to vehicle and naive levels. In addition, RXFP3-A2 increased the number of cells expressing pERK-IR in the MS/DB at 90 (but not 20) min post-injection in cholinergic (but not GABAergic) neurons, which also expressed putative RXFP3-IR. Moreover, icv injection of RXFP3-A2 impaired alternation in a delayed spontaneous T-maze test of spatial working memory. The presence of RXFP3-like IR and the RXFP3-related activation of the MAPK/ERK pathway in MS/DB cholinergic neurons identifies them as a key target of ascending relaxin-3 projections with implications for the acute and chronic modulation of cholinergic neuron activity and function by relaxin-3/RXFP3 signaling. 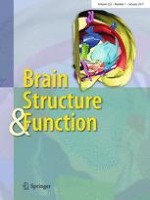 Embryonic interneurons from the medial, but not the caudal ganglionic eminence trigger ocular dominance plasticity in adult mice

Basal ganglia and cerebellar interconnectivity within the human thalamus

Connectivity between the central nucleus of the amygdala and the bed nucleus of the stria terminalis in the non-human primate: neuronal tract tracing and developmental neuroimaging studies

Vertex- and atlas-based comparisons in measures of cortical thickness, gyrification and white matter volume between humans and chimpanzees