To study the detailed mechanisms of tumorigenesis and clinical outcomes of centrosomal protein 55 (CEP55) overexpression in renal cell carcinoma.

Microarray analysis was performed to explore differentially expressed genes in five pairs of RCC tissues. Data of CEP55 expression and corresponding clinical information for 532 RCC patients of TCGA database were downloaded from cBioPortal. The expression of CEP55 in RCC tissues and cells was determined by real-time quantitative reverse transcription PCR (qRT-PCR), Western blot analysis and immunohistochemistry (IHC). Cells were transfected with siRNAs or lentivirus to regulate the expression of CEP55. The effects of CEP55 on proliferation, migration, invasion and epithelial-to-mesenchymal transition (EMT) of RCC cells were determined by MTS, migration and invasion assay and Western blot analysis.

CEP55, one of the most upregulated genes in microarray analysis, was overexpressed in RCC tissues and cells. CEP55 expression was significantly correlated with poor outcome including neoplasm disease stage, histologic grade and TNM status, as well as survival status of patients. In vitro experiments showed that downregulation of CEP55 could dramatically inhibit RCC cell proliferation, migration and invasion, while overexpression of CEP55 could promote these biological behaviors. We further demonstrated that CEP55 knockdown suppressed epithelial–mesenchymal transition (EMT), which was mediated via upregulation of E-cadherin and downregulation of N-cadherin and ZEB1, through PI3K/AKT/mTOR pathway. In contrast, overexpression of CEP55 could promote EMT in RCC cells via the activation of PI3K/AKT/mTOR pathway. Importantly, inhibition of PI3K/AKT/mTOR pathway reduced the effects of CEP55 on the migration, invasion and EMT of RCC cells.

Our study showed that CEP55 could promote EMT through PI3K/AKT/mTOR pathway and might be an effective prognostic marker in RCC. 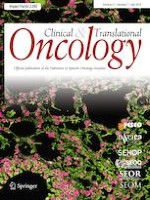 Citron kinase (CIT-K) promotes aggressiveness and tumorigenesis of breast cancer cells in vitro and in vivo: preliminary study of the underlying mechanism